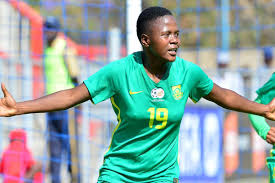 Rhoda is an all-round legend and our newest ambassador for Boots for Africa. She represented South Africa at the FIFA Women’s World Cup in France (2019) and plays for Canberra United Football Club. She was also name SA Footballer of the year 2020.

Rhoda grew up in the Limpopo province of South Africa and was the granddaughter to the King of the Venda people, making her a princess by title.  Despite her heritage, she played soccer barefoot up until the age of 14. As a result, she is incredibly passionate about our cause and is using her voice to incite change!

​Rhoda is also a brand ambassador for Puma South Africa.